4
Étienne de Vignolles (1390 - January 11, 1443), known in Age of Empires II by his real life nickname La Hire, was a French military commander in the Hundred Years' War. He is a playable character in two scenarios of the Joan of Arc campaign, appearing as an infantry hero with the appearance of a Champion in The Cleansing of the Loire and A Perfect Martyr, and is also available in the Scenario Editor. As a hero, he cannot be converted and can regenerate health.

Like other infantry, La Hire is affected by all upgrades and any other bonuses that affect them.

La Hire always refers to himself in the third-person and is portrayed as a brigand-turned-soldier, constantly referring to the fact that he does not have enough blood on his sword (or that it is going dry), or that he needs to kill or break necks. 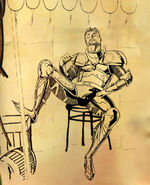 Retrieved from "https://ageofempires.fandom.com/wiki/La_Hire?oldid=318882"
Community content is available under CC-BY-SA unless otherwise noted.