4
Kushluk (or Kuchlug, d. 1218) was a Naiman prince and an early enemy of Genghis Khan who usurped the leadership of the Kara-Khitai, in a coup d'etat. In Age of Empires II, he is the main antagonist of the second scenario of the Genghis Khan campaign, and the player must kill him to win the game. Kushluk is also available in the Scenario Editor.

Prior to the Definitive Edition, Kushluk used to be represented by a Cavalier model with superior stats and a unique icon. In the Definitive Edition, he has a unique model as well. As a hero, he cannot be converted and can regenerate health (since The Conquerors). Technologies that benefit cavalry also benefit Kushluk but he is not affected by other bonuses.

In later updates of the Definitive Edition, Kushluk receives a unique sprite that looks like a Steppe Lancer but is armed with a sword instead of a lance. This sword is like that of Attila the Hun. 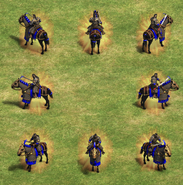 Kushluk in the Definitive Edition
Community content is available under CC-BY-SA unless otherwise noted.
Advertisement