The Krepost (Крепост[1], "Fortress") is a military building and defensive structure in Age of Empires II: Definitive Edition that is unique to the Bulgarians and becomes available once the Castle Age is reached. It is a lesser version of the Castle which can train Konniks, garrison units for protection, and supports 20 population but cannot research technologies.

Kreposts are cheap fortifications that can be used for attacking an enemy or for defending a location. In a similar way to Castles, they can garrison 20 units and support 20 population, but they are weaker (though they are also almost half the price of a Castle). Kreposts can train Konniks, but cannot research technologies or train Petards and Trebuchets.

Used offensively, Kreposts may outperform Castles, since they are created in less time, and the player can make almost two of them for the same price of a normal Castle. Also, the training time of Konniks in both buildings is the same, which means it is more convenient to make two Krepost instead of one Castle if the player wants to spam Konniks. It is better for Bulgarians to perform "Krepost Drops" instead of a normal Castle Drop against an opponent. Like the Castle, this building fires more arrows when garrisoning Villagers or archers inside.

Defensively, as Kreposts have less attack, range, and HP than Castles and cannot make Trebuchets, it is preferable in most cases to make regular Castles for this purpose instead; unless the player either does not have enough stone for the Castle, or wants to cover more area with the same resources in order to gain or retain some map control. Siege units can take down Kreposts in about half the time it takes to destroy a Castle, and they can more easily outrange them. Of course, like Castles and Towers, it is better to place a defensive Krepost on a choke point, behind an obstacle (like walls, cliffs or a forest) in order to protect them from non-ranged attacks, or in an elevation.

An empty Krepost is able to fire five arrows at a time, with a base damage of 10 each. Garrisoning either Villagers or archers adds additional arrows to the Krepost's fire, up to maximum of 21. One base arrow and 20 additional arrows are fired. The Krepost inherently already has 4 "power", which is listed in the attack with parentheses. Not all garrisoned units add the same number of arrows, their value is generally dependent on two factors: attack and Rate of Fire. The more damage output the garrisoned units have, the higher the number of arrows fired.

The following table shows the maximum number of arrows a Krepost can fire, when it is garrisoned with units of the same type:

As Kreposts are unique to the Bulgarians, only technologies that are available to them are shown in the following table: 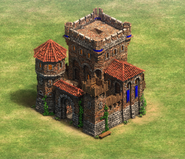