Kotyan Khan (OES: Котян; Hungarian: Kötöny; Arabic: Kutan) is a campaign in Age of Empires II: Definitive Edition. It is based on the exploits of Köten Khan (baptised Jonas; reigned 1223 – 1241), a Cuman-Kipchak chieftain and military commander. Köten is known for bringing the Cuman-Kipchaks into an alliance with the Kievan Rus' to oppose the Mongols and migrated to Hungary along with his 40,000 "huts" after being decisively defeated at the Battle of the Kalka River. There Köten converted into Christianity and became a supporter of Béla IV, but was assassinated under the order of suspicious Hungarian nobles prior to the Battle of Mohi. Köten's death resulted in the Cumans pillaging Hungary as they emigrated to Bulgaria, although some of them later returned to Hungary and settled there.

5
Kotyan Khan is a cavalry archer hero available only in the Scenario Editor in Age of Empires II: Definitive Edition. In-game, he possesses very high damage output and durability, and has a bonus against siege weapons similar to a Mangudai.

Though the unit is unique, it operates identical to that of a cavalry archer, albeit with higher armor, attack and health. Like all hero units, it is immune to conversion and regenerates health.

The Kotyan Khan campaign consists of 5 scenarios. The player plays as the Cumans, and the player color is green.

The campaign is narrated by an unnamed Cuman chieftain who succeeds Kötyan as the khan of the Cumans following his assassination. 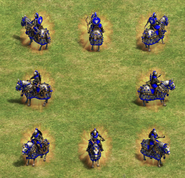 Many views of Kotyan Khan

A statue of Kotyan Khan in Karcag, Hungary
Community content is available under CC-BY-SA unless otherwise noted.
Advertisement