The Konnik is the unique unit of the Bulgarians in Age of Empires II: Definitive Edition. It is a cavalry that turns into a Dismounted Konnik, an infantry, when killed.

The Konnik is a very special unique unit, as it has to be killed twice (first time mounted, second time dismounted). This quirk makes the unit not only durable, but also versatile, as they can mess with the possible counter-units the opponent may have. While the mounted version is weak against Camel Riders and the Spearman line, the dismounted version is not; and vice versa, the typical counters for infantry do not affect the mounted version. Any clever opponent must mix two types of counter-units against a mass of Konniks, with some exceptions (see Counters).

Konniks have a similar conversion resistance to a Knight (that is extremely poor), but Bulgarians can also research Heresy, so when facing Monks, one of these three scenarios may happen:

Stat-wise with Stirrups, a non-Elite Konnik is comparable to a Knight (better in melee fights, worse against ranged units), while a fully upgraded Elite Konnik is better than a Cavalier. This makes the Konnik incredible as a shock troop, able to raid, soak damage, and disrupt enemy Villages, destroy colonies, or diminish an enemy garrison. In addition, they turn to infantry when killed, so for any Bulgarian player, they should prefer them over the Knight line in most situations.

It takes 3 seconds for a Dismounted Konnik to get back into the fight after being dismounted. The unit cannot be interacted with during this animation, as technically the Dismounted Konnik is spawned only after the animation has been completed.

As an infantry unit, Dismounted Konnik is affected by infantry-related technologies (Blacksmith upgrades, Arson, Squires) and receives a +4 anti-building attack bonus. The infantry non-Elite version is a little weaker than a Long Swordsman, with the exception of the attack. The Elite dismounted version can be seen as a frail Two-Handed Swordsman with a slightly better attack value but slower attack rate.

Konniks can be created at Kreposts, and for this reason Bulgarian players must use a combination of both for a "Krepost Drop".

The Castle Age unique technology Stirrups gives them an attack speed boost of 33%, which drops the mounted version's ROF from 2.4 (slowest melee attack in cavalry) to 1.8 which is the same as that of Knights and Cavaliers, their standard counterparts, and better than that of a Paladin (1.9). Stirrups does not affect the dismounted version, which makes it the slowest attacking infantry unit outside of the trash Spearman line (3). The dismounted Konniks are also special in the infantry branch, being tied with the Militia for being the only non-specialised unit, to not have an attack bonus against Eagle units.

They also have a 5 tile LOS, which is better than Knights, Cavaliers and Long Swordsmen, which have 4, and the same as Paladins, Two-Handed Swordsmen and Champion, all of which are its standard counterparts in two forms. They also have the same speed as all of their counterparts.

Despite the quirk the Konnik has, there are several units in the game that represent a threat for both versions of the unit:

Units with partial strengths, which are good in some situations, include:

As Konniks are unique to the Bulgarians, only technologies that are available to them are shown in the following table: 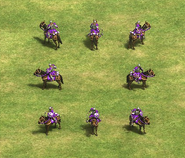 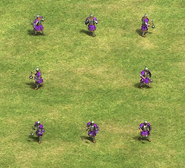 A group of Dismounted Konniks

When dead, a Konnik will resurrect as an infantry unit