The Komodo Dragon or Monitor Lizard is a carnivore Treasure Guardian in Age of Empires III: The Asian Dynasties and a hostile wild animal in Age of Empires II HD: Rise of the Rajas. They are the largest species of lizard in the world and featured in Southeast Asian maps, in both games.

0
The Komodo Dragon appears in Rise of the Rajas, and is one of several hostile animals that the player may encounter in unexplored areas. It holds no food and attacks Villagers and even some military units on sight. As it will most likely prevail against Villagers that do not have the Loom upgrade, it is recommended to research it before sending them in unexplored areas.

Unlike the animal that appeared in the third game, it has more realistic proportions, albeit slightly larger size than a Tiger. They appear exclusively in South East Asian maps, as today they only live in modern-day Indonesia.

A pair of Komodo Dragons in-game

10
The Komodo Dragon appears in The Asian Dynasties on maps such as Indochina and Borneo. They aren't the most resilient of Treasure Guardians, being only slightly stronger and tougher than Wolves. It is interesting to note that they are referred to as Monitor Lizards, an umbrella term referring to the family of lizards (Varanidae) to whom the Komodo Dragon belongs.

Some of these claims have been proven false since the game came out or were already erroneous:

An in game Monitor Lizard 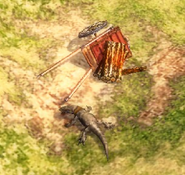 A lone Monitor Lizard guarding a Treasure in Indochina

×2.0 vs Treasure Guardian
×0.1 vs Villager
Kermond the Pet Monitor Lizard is a pet Komodo Dragon in Age of Empires III: The Asian Dynasties.

They are far from the strongest pets in the game, but can still be viable against Treasure Guardians, and are also available very early in the game; the Japanese can use two Home City Cards, one bringing three Kermonds, whereas another is a TEAM shipment, shipping two Kermonds for the entire team. They can also be rescued from Treasures on Yellow River and Silk Road.

Both shipments are available from the Exploration Age, thus providing an advantage at Treasure hunting.