The Knight is a heavy cavalry unit in Age of Empires II that can be trained at the Stable once the Castle Age is reached. Their ability to slaughter infantry, archers, lesser cavalry, and siege weapons is unparalleled in the Castle Age, where they often form the primary fighting force. However, they are still susceptible to certain weaknesses, such as overwhelming firepower, Monks, Camel Riders, or the cavalry banes, Pikemen.

Knights are available to all civilizations except for the Aztecs, Bengalis, Dravidians, Gurjaras, Hindustanis, Incas, and Mayans.

If a Meso-American civilization gets a Stable (either by conversion or by triggers), they can train a Xolotl Warrior, which has exactly the same stats as the Knight. However, due to the lack of further upgrades (Cavalier, Paladin) and important technologies (like Bloodlines, Husbandry and Blacksmith cavalry armor technologies), these tend to lose their charm in the Imperial Age. The only bonus this unit receives is the creation speed bonus of the Aztecs. Technologies affecting this unit are Forging, Iron Casting, and Blast Furnace.

The Knight, being the primary shock unit of most armies, is one of the most effective units used to disrupt enemy villages, destroy colonies, or diminish an enemy garrison. With its high attack, hit points, and natural armor, it can easily stand up against most opposition. Its ferocity can only be matched in terms of both attack power and speed by the Camel Rider, though a line of Pikemen could also serve as a good defense, provided they can catch them. It is advised to pair Archers with Knights to counter Pikemen. Monks are also a threat, mostly because Knights are faster to convert than other cavalry units.

Knights are best used in the early Castle Age, when they have few effective counters. Their presence weakens as the economy develops, when unique units, Pikemen, Heavy Camel Riders, and siege weapons come into play. Also, their enormous gold cost means that, in the long run, infantry gradually becomes easier to produce en masse, and can outnumber the Knights. Still, they and their upgraded counterparts play a significant role in the late game, particularly against archers and Trebuchets.

The Knight line, with the Knight on the left 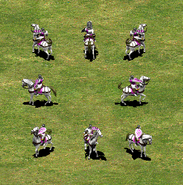 A group of Knights 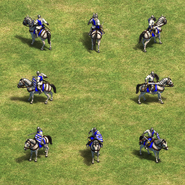 A group of Knights in the Definitive Edition

A Knight with its successor the Cavalier in the Definitive Edition 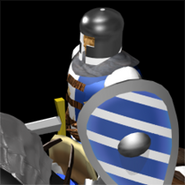 A render of the Knight model

Sprite of a running Knight.

A group of Knights with "pumpkin head knight" skin