Fires three (four when Elite) arrows at once

20 seconds (12 if available via Cuman Mercenaries)

The Kipchak is the unique unit of the Cumans in Age of Empires II: Definitive Edition. It is a cavalry archer that fires multiple arrows in rapid succession.

Only the first arrow does full damage and is affected by damage upgrades, though. All the other arrows fired deal 3 pierce damage and 0 melee damage (the latter is very helpful when battling rams). A regular Kipchak fires three arrows per burst, and an Elite Kipchak fires four.

Kipchaks can be upgraded to Elite Kipchaks in the Imperial Age.

Kipchaks are great harassers, especially if massed, as their extra arrows enables hit-and-run arrow volleys. They perform exceptionally well against slow-moving units. As their secondary arrows deal 0 melee damage (in addition to their regular 3 pierce damage), they are a great counter against rams.

Unlike other cavalry archers, and in a similar fashion to the Chu Ko Nu, they can still fare fairly well against archer-resistant units. This is because archer-resistant units (such as Skirmishers) can survive archer fire due to their pierce armor. But due to the high number of arrows fired, the Kipchak (especially Elite) still deals a considerable amount of damage, especially to rams and Shrivamsha Riders. However, they should still try to avoid anti-archer units in general. They are also weak against camels, especially the Berber Camel Archer, and other anti-Cavalry units such as Kamayuks and Halberdiers, but they can hit-and-run them if properly microed.

Cuman players should prefer the Kipchak over the regular Cavalry Archer in most circumstances, unless the player does not have enough Castles to produce a sizeable army of them. Not only do they have a better attack, but Kipchaks also cost less gold than regular Cavalry Archers. However, Cavalry Archers have more hit points and attack slightly faster than Kipchaks, and may be used in circumstances in which the player need to soak damage instead of harassing the opponent. Also, they are affected by Steppe Husbandry which boosts their creation speed, while the Kipchaks are not affected. Kipchaks work well if they are paired with Light Cavalry (which only cost food, so the wood and gold can be spent on Kipchaks, and Light Cavalry can be used as "cannon fodder" for the front lines, as well affected by Steppe Husbandry) or Steppe Lancers.

Elite Kipchaks can be considered a semi-shared unique unit and a "semi-trash" unit, since they become available at the Castle for free to every allied player after the Cuman player researches Cuman Mercenaries, but limited to 5 of them per Castle for the player or ally, including Castles built later. Naturally, if an allied civilization has further bonuses and unique upgrades for Cavalry or Cavalry Archers, those will apply to their Elite Kipchaks.

Cuman Mercenaries stacks up, so it can facilitate the production of the Elite Kipchak even on a team entirely composed by Cumans. In free-for-all games or 1 vs 1 matches, it may be preferable to just train Kipchaks the regular way in several circumstances, unless the player needs Elite Kipchaks at the ready (not the regular ones) and has not researched the elite upgrade or if player has less than 3 Castles.

The Kipchaks were a people group that lived on the Eurasian Steppe. While they were scattered much of the time, they settled down in places like Georgia and Siberia. While they began as part of the Turkic Khaganate, they later formed a confederacy with the Cumans. The Kipchaks were horse archers like the Mongols, who they and the Cumans were eventually conquered by. 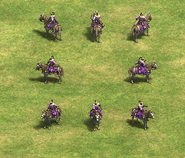 A group of Kipchaks