Age of Empires Series Wiki
Register
Don't have an account?
Sign In
Advertisement
in: Egyptian units, Tale of the Dragon, Classical Age, Infantry

16 feet
The Khopesh Swordsman is an Egyptian Counter-Villager Infantry unit in Age of Mythology: Extended Edition. It was added in the v1.16 patch and the Tale of the Dragon expansion.

Some may consider the Khopesh Swordsman as being the first "true" trash unit in Age of Mythology due to their low stats and niche role against Villagers. However, it is worth noting that in spite of their comparatively lackluster stats, they are blisteringly fast, being far and away the quickest infantry in the game and even able to outrun most cavalry units, in addition to being exceptionally cheap. If one does use them in combat, one might consider using them as a replacement for Classical Age cavalry, something Egypt otherwise lacks, to supplement Spearmen and Axemen, ideally avoiding the enemy's army entirely and just running past them to raid their villagers. 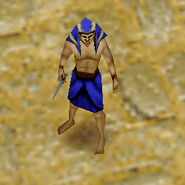