The Khan is an untrainable Cavalry unit in Age of Empires II: Definitive Edition. It is only available in the campaigns and the Scenario Editor.

The unit is visually similar to a Cavalry Archer. Despite having the golden glow of Hero units in the Definitive Edition, the Khan is not a hero but a common unit, does not regenerate health, can be converted, and is listed in the Units tab of the Editor. 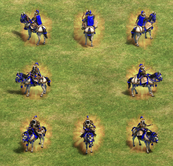 Gran Cane'Rè de'Tartari (Great Khan king of Tatars). Illustration by Cesare Vecellio, 1589
Add a photo to this gallery
Retrieved from "https://ageofempires.fandom.com/wiki/Khan?oldid=271365"
Community content is available under CC-BY-SA unless otherwise noted.