The Keshik is a mounted archer in Age of Empires III: The Asian Dynasties that is unique to the Chinese and trained as a part of the Ming Army and Mongolian Army.

Make sure that Keshiks stay away from Heavy Cavalry attacks, due to their lower hit points. Nevertheless, the Keshik is the second hardest hitting ranged cavalry after Zamburak, thanks to faster fire rate compared to Dragoons, and they take only one population slot, while Dragoons and Cavalry Archers take two.

As Keshiks are unique to the Chinese, only technologies that they have access to are shown in the following table:

As Keshiks are unique to the Chinese, only their cards and other civilizations' TEAM cards are shown in the following table:

"The mounted archers of the Mongolian Empire, the largest contiguous empire in human history, were feared for their mastery of the composite bow and their use of unpredictable light cavalry tactics. Using composite bows fashioned from a combination of materials, such as wood and animal bone, and held together with an animal hide adhesive, the keshik horsemen could fire arrows up to a range greater than 1,000 feet. They often carried two bows, one for short-range attacks and the other for distance volleys, and their quivers could contain a variety of different arrows for different purposes, including incendiary arrows, armor-piercing arrows, and whistling arrows to startle enemy units and throw them into a panic.

The keshik were renowned for their ability to maneuver and shoot while on horseback, often turning a full 360 degrees to aim and fire on an enemy target. Charging the enemy in a traditional crescent formation, they would attempt to flank and surround the enemy. If this tactic failed, they would quickly pull back, often feigning retreat in an effort to lure their enemy into a trap.

More than simple warriors, the keshik were an elite imperial guard created by Genghis Khan himself, a fierce fighting force that began with the 1,000 warriors of his personal guard and grew to an army numbering 10,000 men. During wartime, the keshik were under direct control of the emperor who only rode to war with the keshik at his side. As a royal guard, the keshik’s peacetime activities were mostly administrative. They supervised palace staff, cared for the equine, and maintained careful care of weapons and other supplies." 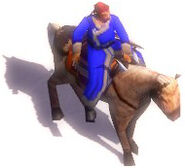 An in-game Keshik
Add a photo to this gallery
Retrieved from "https://ageofempires.fandom.com/wiki/Keshik_(Age_of_Empires_III)?oldid=258598"
Community content is available under CC-BY-SA unless otherwise noted.