The Keshik is the first unique unit of the Tatars in Age of Empires II: Definitive Edition. It is a cavalry unit which slowly generates gold while attacking enemy units.

Keshiks can be upgraded to Elite Keshiks in the Imperial Age.

Keshiks are an interesting case: a medium cavalry unit similar to a Cavalier with an economic quirk. Their high attack and hit points (for a Castle Age unit) and ability to generate gold while attacking make them excellent raiding units. A powerful strategy is to attract the opponent's attention with Cavalry Archers or Steppe Lancers and hit-and-run their military while a group of Keshiks raid their economy. The gold generated can be modest, but the player still earns 3 gold per enemy Villager killed, which is definitely favorable. Usually, population space can be better spent on Cavalry Archers, Steppe Lancers, or siege units. The exception lies in Town Center snipes and raids on the opponent's trade line, where the Keshik has the potential to generate huge sums of gold, or in massive pitched battles, especially when there are no cavalry counters on the field.

For a Town Center snipe in the Castle Age, a group of 14 Keshiks can easily take down an unguarded, generic, fully-garrisoned Town Center. However, the Tatar player should not destroy the Town Center completely. Once the Villagers are ejected from the Town Center, the Keshiks should target them instead. A Town Center with 15 Villagers garrisoned within means 45 gold with 14 units in a split second, as well as the damage inflicted on the opponent's economy.

Keshiks should be preferred over knights in the early Castle Age for a rush (if the player can afford a Castle or starts with it), as they generate gold when attacking an enemy unit while also being cheaper. They can also make a great difference in the late Imperial Age, especially in 1 vs 1 or FFA games, as their gold generation may help to sustain late game gold economy and delay the "trash wars" a bit (but the player should still take Relics and support Keshiks with trash units).

Soon after release, the Keshik was changed from a heavy cavalry to a medium cavalry unit. The difference between the two is attack (armed), whereas both are usually equally armored. The reason for this may be because it was a 'Paladin' at the Castle for a civilization (Tatars), which lacks the upgrade, similar to the case of Boyars and Slavs. Paladins and equivalents are not a popular unit in 1vs1 Random Map games due to the scarcity of gold. While the Boyar packs a lot of punch with its extra melee armor, making it unique in melee combat, the Keshik was just a weaker (-30 HP, -1 armor) and more expensive (+5G) Paladin at the Castle. The unit was overhauled in the next patch to give it a unique and viable role.

The Keshik is slightly faster than a Knight, but this speed advantage allows them to keep up with all mounted archers, which should be the ideal composition for Tatars in late-game in presence of gold. The Keshik being a medium cavalry, it is still slower than both Camel Riders and Light Cavalry.

While the melee fight of a Cavalier and Keshik can go either way, the player should prefer the Keshik because of its higher HP and pierce armor, making it the more durable unit in a variety of situations, most importantly raiding. This is ignoring the facts that it is cheaper in gold as well as generates gold. Another factor favoring the Keshik is the extra line of sight radius over non-Frank Cavaliers, equaling non-Frank Paladins'.

The Elite Keshik faces a lot of competition in the Tatar technology tree. At the Stable, they have Hussars (which have the same armor as Keshiks due to a unique technology), Elite Steppe Lancers, Heavy Camel Riders, and Cavaliers. At the Castle, the superior Tatar Trebuchets demand work time to be created. The player should use their decision-making to decide which units need to be created, since the Trebuchets can be replaced by perfectly viable Siege Rams at close range.

The specific drawback of Keshiks compared to Paladins is the lower melee attack, which becomes a huge factor in razing Castles and Kreposts. Nonetheless, Tatars have quite potent siege.

Even being a very cost-effective cavalry unit, they quickly fall to any anti-cavalry unit or stronger units like Paladins, Teutonic Knights, Samurai, Boyars, Konniks, Leitis, Battle Elephants and War Elephants, making the use of other units to protect Keshiks a must. Keshiks are extremely vulnerable to conversion due to lacking both Faith and Heresy. As a result, using Tatars' excellent Hussars to kill Monks is also essential.

As Keshiks are unique to the Tatars, only technologies that are available to them are shown in the following table:

Kheshig means "blessed" in Mongolian. Historically, Kheshigs originated from many different ethnic groups and served as bodyguards for Mongol nobles as well as dignitaries of other Mongol-influenced states. 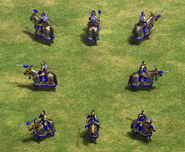 How much gold do Keshiks make?