200 with a regeneration of 1 HP/second

Myth Units (3), Set Animals (3)
Kemsyt is a villain in the Fall of the Trident campaign in Age of Mythology.

Kemsyt is originally sent by Gargarensis to the city of Ioklos, where he leads a group of bandits in taking the people of the city, including Chiron, prisoner. He then enslaves some of them, and forces them to dig up an Underworld Passage.

Kemsyt leads a band of Egyptian raiders, and is the archenemy of Amanra. He is said to be shrewd and cunning, and not inclined to put himself in danger. He is one of the two main mortal allies of Gargarensis and works with him to prevent the god Osiris from being resurrected.

After the heroes succeed in reviving the dead Osiris, Kemsyt flees with Gargarensis to the Norselands. When the Tartarus Gate in Niflheim was sealed, Skult placed a spell on Kemsyt, making him look like Gargarensis.

Kemsyt leads the remainder of Gargarensis's Norse allies against the heroes, but is beaten by the timely arrival of Odysseus and several Greek soldiers. Once he's captured, Ajax beheads the disguised Kemsyt. Upon their journey back to Atlantis, the heroes discover that they have beheaded Kemsyt when a soldier removes his head from a box, intending to lash it to the bow upon their entering Atlantis's harbor. 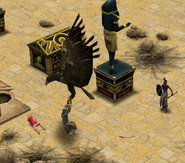 Kemsyt being carried away by a Roc.

Roc carrying Kemsyt in the distance.
Add a photo to this gallery
Retrieved from "https://ageofempires.fandom.com/wiki/Kemsyt?oldid=277573"
Community content is available under CC-BY-SA unless otherwise noted.