In Fall of the Trident, Kastor is a weak unit who wields a single sword. In The New Atlantis, Kastor is a powerful hero unit armed with two swords whose special ability is a powerful sword attack which sends human units flying, dealing moderate or heavy damage to infantry and myth units, respectively.

Myth Units (7)
Set Animals (3)
A decade later, Kastor is now a General of the remnants of the Atlantean Army. After being informed by a Servant of Kronos in the guise of Krios of a land that is much more hospitable than the Norselands, Kastor leads his people through an abandoned Sky Passage, protected by Norsemen which takes them to a lush and bountiful island north of the Iberian peninsula.

Upon arriving at this new destination, Kastor encounters Overgrown Temples, constructed in honor of the Titans and comes to the conclusion that the Atlanteans have found favor in their eyes, subsequently ordering the temples' repair. When the citizens of the Greek colony discover that the Atlanteans are reconstructing these Temples, they attack them out of fear for worshipping the Titans.

Demanding an explanation for the attack, Kastor pursues them to their Greek city-state of Sikyos and upon arrival does battle with and defeats the army of Sikyos in the South-east of the city, and kills its commander, Melagius. Before the Atlantean Cohort can take the city, however, Egyptian and Norse allies (possibly allied garrisons) of Sikyos arrive to reinforce it.

Kastor therefore withdraws and initiates simultaneous attacks in both Egypt and Midgard as a means of retaliation and to cause the Egyptian and Norse troops stationed at Sikyos to be forced to withdraw to defend their homelands. Kastor's diversionary tactics are successful, and the reinforcements withdraw to their respective homelands, leaving Sikyos defenseless.

Upon the return of Kastor and his forces to Sikyos, Krios reveals to him a Sky Passage which leads him onto Mount Olympus. After setting foot on Mount Olympus, Kastor is overcome with the ambition of climbing to the summit of the mountain. Kastor succeeds in reaching the summit, and upon doing so, he is transported back to the north-west of Sikyos. It is here that the servant of Kronos makes himself known, and reveals to Kastor that he had masterminded his activities as a means of weakening the hold of the gods on the gates of Tartarus enough for the Titans to escape.

Shortly after, the Titan, Prometheus, emerges in the central west of Sikyos and begins to destroy the city. Kastor is then confronted and attacked by a group of Atlantean Olympiasts (Atlaneans who worship the Greek gods) who regard him as having betrayed his people, but is rescued by the newly arrived Ajax and Amanra, who had come to defend Sikyos against the Atlanteans. Afterwards, Kastor, Ajax and Amanra journey to Egypt to fight Cerberus first, as they regard Egypt as the most important land to defend (Most likely due to its cities, and population compared to the Norselands)

Later, in Midgard, they meet the Frost Giant Folstag, who has now become a king, after the events of Fall of the Trident, where they join together to defeat Ymir, a Norse Titan with the help of the Nidhogg, now tamed.

They eventually return to Sikyos, using the influence of Gaia to attacked Prometheus. Now weakened (most likely due to the natural energies from Gaia) Prometheus is defeated by the Atlanteans, Ajax and Amanra.

Kastor finally returns to New Atlantis, only to find the Servant and rogue Automata who animate and begin destroying the island. The Servant flees to yet another Sky Passage, and the heroes, and some Atlantean soldiers follow suit.

The heroes arrive on the southern ruins of Old Atlantis, on the ruins of what was once the temple complex of Atlantis, now greatly changed due to the earthquakes, and the sinking of Atlantis.

With the power of the Olympian gods broken, Kronos attempts to break himself out of Tartarus, and succeeds, but with the help of the Titan Gaia, who, unlike the other Titans, is said to be a beneficial force, Kastor fights Kronos, and succeeds in banishing him again.

With Kronos back in Tartarus, his Servant is trying to escape, only to be killed by Kastor, Upon the victory, Arkantos appears to Kastor and makes him as the new ruler of Atlantis, handing him the Staff of Atlantis, whilst an Atlantean colony is built upon the complex's ruins.

Kastor in Fall of the Trident

Adult Kastor in the expansion, with Atlantean warriors

Kastor with the staff of the Theocrat, received from Gaia

Beta icon of Kastor (Adult). (Used for the "Ruler of Atlantis" Steam Achievement)

Adult Kastor killing a Turma with his special attack 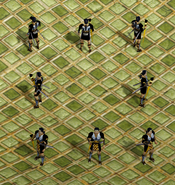 Many views of Kastor holding a staff.