Advances the player into the next Age
Sends a shipment of food, wood, and coin when built

Keepers of the Rats

The Karni Mata is a wonder in Age of Empires III: The Asian Dynasties that is unique to the Indians and can be built to advance into the next Age. It sends a shipment of food, wood, and coin when built and has Keepers of the Rats that increases the gathering rate of nearby villagers.

Keepers of the Rats (passive): Increases the gather rate of friendly villagers in a radius of 36 around the Karni Mata by 10%.
Note that this aura scales from upgraded gather rates and not from the base rate. This makes all applied upgrades 10% more effective.

The Karni Mata is potentially India's strongest wonder for the later stages of the game. Because of the way the aura stacks onto all other gather rate upgrades, it enables India to have a much more powerful economy than might be expected. With the maximum Villagers gathering under the aura and imperial upgrades researched, the excess resources generated (in comparison to the same Villagers without the aura) are greater than an upgraded Factory (exact numbers depend on how many Villagers are gathering food, coin or wood). This can be supplemented with the French Consulate passive bonus, which also stacks on the upgraded gather rates. This can allow a player to freely utilize the Consulate export gather rate options without any true penalty to their economy, if Consulate units are needed.

With both auras and the Home City wood trickles, India is able to match the equivalent of a 120 Villager eco without any penalty to their population cap.

As the Karni Mata is unique to the Indians, only technologies that they have access to are shown in the following table:

As the Karni Mata is unique to the Indians, only their cards and other civilizations' TEAM cards are shown in the following tables: 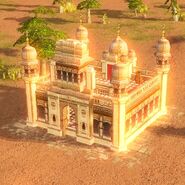 A photo of the real Karni Mata temple in Rajasthan, India

Karni Mata in the original version and Definitive Edition
Add a photo to this gallery
Retrieved from "https://ageofempires.fandom.com/wiki/Karni_Mata?oldid=316694"
Community content is available under CC-BY-SA unless otherwise noted.