The Karambit Warrior is the unique unit of the Malay in Age of Empires II HD: Rise of the Rajas. It is a very cheap, quick, and frail infantry unit that only takes up half a population spot.

Karambit Warriors are the prime example of "quantity over quality". They are very cheap and only take half population space per unit. Furthermore, they move faster than most other infantry. They should always be used in swarm to balance the fact that they have very low HP. However, because they still cost gold, it is inadvisable to mass Karambit Warriors without correct purpose and proper micromanagement. For example, they shouldn't be used against a group of units with ranged attack or bonus damage against infantry. While spammable, they are by no means expendable, as unlike Shotel Warriors they have poor attack and even lower HP than them, while costing three quarters the gold a Militia-line unit costs.

Karambit Warriors are an excellent choice for a raiding tactic. A group of Karambit Warriors can be sent into an unprotected enemy base, kill some of their Villagers or destroy some of their important buildings, and then retreat quickly when enemy troops arrive. When sending them into an enemy base, the player has to make sure there are no defensive buildings, ranged units, or cavalry around because Karambit Warriors die very quickly when hit. As far as this tactic is concerned, it is interesting to note that as a Karambit Warrior is affected by Arson and also boasts a +1 attack bonus against standard buildings, and Karambit Warriors can easily envelop structures with sheer numbers, and inflict "death of a thousand cuts" destruction on enemy buildings, preferably away from defensive structures. Gold-free Long Swordsmen and cheaper Battle Elephants (depending on many factors, such as the stage of the game and available resources) can further assist in wreaking as much havoc as possible, as they have superior stats and attack bonuses against buildings.

Karambit Warriors also work well as emergency reinforcement. They are created very fast and can be massed in a very short time. That means if the player's base is attacked with Rams or Trebuchets and there are no other military units around to defend the base, the player can simply train a small number of Karambit Warriors and then send them to destroy the invading siege units. Against Onagers or Scorpions, a group of Karambit Warriors should be sent in staggered or flank formation to reduce the splash damage taken.

Similarly, a swarm of Karambits, utilizing their great speed and numbers, can envelop some stronger units such as Boyars (but Battle Elephants, War Elephants and Cataphracts will crush them easily, thanks to trample damage and/or anti-infantry attack bonuses) in order to constrict their movement and prevent them from engaging more important units, such as Bombard Cannons. Combined with archers, this tactic can cause disproportionate damage to expensive-but-mighty units that can otherwise spell trouble.

Other potential uses in a game include distraction and Ram-filling. In the first case, somewhat similar to the raiding tactic described above, the player can utilize large groups of Karambits and probably Light Cavalry (despite Malay cavalry being among the worst in the game) to harass an unguarded enemy position (preferably one with many Villagers), in order to invoke a panicked reaction from another player, due to their numbers, and make them do a wrong move (e.g. an army that would strike a nearby ally could be forced to withdraw).

In the second case, Karambits can quickly fill Rams and save time needed for preparing a siege, or even provide a well-played Castle Age Ram rush.

As Karambit Warriors are unique to the Malay, only technologies that are available to them are shown in the following table:

Karambit or kerambit is a curved-shaped knife of Indonesian origin. According to local folklores, the design of karambit was inspired from tiger claw. Originally designed for hunting and agricultural purpose, the karambit was later weaponized. The karambit's unique design allows its user to change fighting ranges without body movement and deliver multiple strikes with only one arm movement.[1] 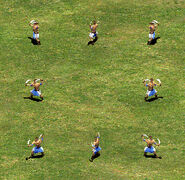 A group of Karambit Warriors 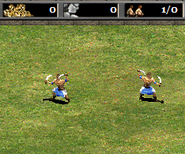 Karambit Warrior in the HD Edition and Definitive Edition