The Kanya Horseman is a melee heavy cavalry in Age of Empires III: The WarChiefs that is unique to the Haudenosaunee and can be trained at the Corral.

The Kanya Horseman is the standard heavy cavalry available to the Haudenosaunee. It acts as an effective counter to artillery and skirmishers, as well as a good raider. When compared to the Hussar, it has slightly lower hit points and attack, but higher armor; thus, at range, they are actually superior to Hussars in tanking ability, but slightly weaker in melee or against units which deal siege damage. If the Haudenosaunee War Chief is nearby, the aura increases the hit points and overcomes this weakness entirely. Kanya are generally well rounded cavalry and can be thought of as falling somewhere between a Hussar and a Cossack.

Kanya possess a very powerful multiplier against artillery, and as such are extremely capable at quickly dispatching unprotected cannons. If a player wishes to mass Kanya, a card worth considering is "Haudenosaunee Woodworking", which improves villagers' wood gathering speed by 60%.

Kanya are unique in costing both food and wood, instead of coin. While this is an advantage in the Commerce Age, where all Haudenosaunee units cost only wood and food, it becomes a hindrance in later ages – firstly due to difficulties in balancing economy with coin-costing units, and secondly, in the late game where wood becomes scarce.

Assuming a player is able to safely gather the large quantities of wood needed to mass Kanya in the later stages of the game, they can actually be one of the most powerful standard cavalry units; the War Ceremony and War Chief aura scale after upgrades, and with all available upgrades, will actually give Kanya better attack and hit points than a fully upgraded British Life Guard Hussar, but with more speed, higher armor and their powerful anti-artillery multiplier.

As Kanya Horsemen are unique to the Haudenosaunee, only technologies that they have access to are shown in the following table:

As Kanya Horsemen are unique to the Haudenosaunee, only their cards and other civilizations' TEAM cards are shown in the following tables: 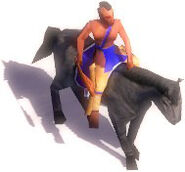 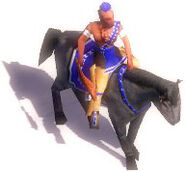 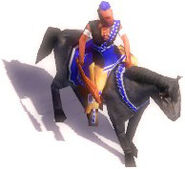