The Kangxi Emperor (1654 - 1722) was the fourth emperor of the Qing Dynasty and is the Chinese civilization AI in skirmish in Age of Empires III: The Asian Dynasties. He ruled from 1661 to 1722. Today, he is considered one of China's greatest emperors. In-game, he is voiced by Barry Dennen.

Kangxi prefers the Territorial Army and Siberian Cossacks, but will also ship Meteor Hammers or Keshiks. He will usually build the Confucian Academy as his Commerce or Fortress Age Wonder, and will use Flying Crow artillery with his armies. Kangxi does not rely heavily on artillery besides the flying crow, and it is extremely rare to see him using Hand Mortars or Flamethrowers in his armies. In the Definitive Edition, Kangxi is much stronger, and will frequently utilise a wide range of units in his army, especially Chu Ko Nu, Steppe Riders, Iron Flails, Meteor Hammers, and Hand Mortars. 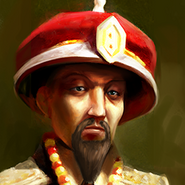 Wikipedia has an article about:
Kangxi Emperor
Community content is available under CC-BY-SA unless otherwise noted.
Advertisement