The Kamayuk is the first unique unit of the Incas in Age of Empires II HD: The Forgotten, the other being the Slinger. It is an anti-cavalry infantry unit that carries a very long spear.

Kamayuks can be upgraded to Elite Kamayuks in the Imperial Age.

Kamayuks are most effective in large groups, as they have a range of one, enabling them to attack from behind one another. Due to this, they can counter cavalry effectively, as they do not have to run around each other in order to attack. Also, their fast training speed means they are easy to mass. Much like Pikemen, Kamayuks get an additional attack bonus against elephant type units such as the Battle Elephant.

Their range allows them to attack through Walls, making them good at defending or attacking in walled areas. This also means they can be a great defense against enemy Rams.

Unlike Pikemen, Kamayuks trade decently against other infantry in large enough groups due to their higher Rate of Fire and considerably higher base attack. Additionally, their 1 range means that in large numbers they can inflict surprising casualties on enemy infantry. Still, they should be used in conjunction with Slingers to protect them from infantry, while Kamayuks can mow down hordes of cavalry without worrying about infantry. Eagle Warriors can also be included to protect the Kamayuks from archers and siege weapons, which can deal heavy damage to them despite their pierce armor from Fabric Shields. Hand Cannoneers will decimate Kamayuks. Lastly, Cataphracts will dominate Kamayuks due to their resistance to anti-cavalry attacks, their bonus damage against infantry, and their trample damage.

A common dilemma for Inca players is whether to use Halberdiers or Kamayuks, this will depend on resource availability. If there is gold to spend, the Kamayuk should be always the cavalry counter unit of choice, if there is not enough gold, the player can mix in some Halberdiers that are cheaper than the more expensive and effective Kamayuk.

As Kamayuks are unique to the Incas, only technologies that are available to them are shown in the following table:

In an Inca army, a Kamayuk was an officer in charge of lesser soldiers such as a slinger or archer. Lesser Kamayuks blew conch shell trumpets or beat drums. Lesser Kamayuks had designations before the titles, such as Choru or Pachac. The highest Kamayuks were simply called Kamayuks. 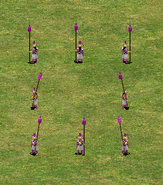 Thanks to their massive spear, Kamayuks are able to attack from right behind a partner. 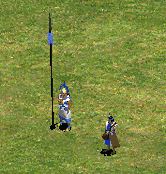 Both Incan unique units: the Kamayuk and the Slinger. 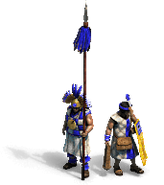 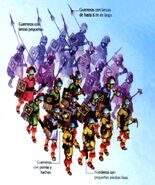 Inca Formation: The warriors in the back rows used spears up to 6 meters (20 feet) long.

Kamayuk in the HD Edition and Definitive Edition. 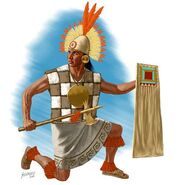 Reconstruction of an Inca Warrior.