Old one (by Pierre Beaumont)

Alive (as of Act III: Steel)

Miguel Najera
Ká:nien (Kanyenke before the Definitive Edition) is the deuteragonist in the Act II: Ice and Act III: Steel campaigns in Age of Empires III. He was a close friend of John Black, uncle and a teacher to Nathaniel Black and the granduncle of Amelia Black.

Ká:nien is a proud Mohawk warrior of the Iroquois. Smart, savvy and strong, he is a master at using a bow for ranged attacks and delivers a lethal, lightning-fast swipe with his tomahawk at close combat. As John Black's faithful friend and ally, Ká:nien has fought fierce battles and eluded dangers alongside Black to share the spoils from many victories.

In 1757, Morgan's grandson, John Black, and his Native friend Ká:nien are on their way to Brunswick, Black's uncle Stuart’s colony, as he has called for help. After exchanging attacks with Cherokee raiders and war camps, they attempt to arrange a peace settlement. When they reach the village, they are attacked by the British who capture the town. While planning a counterattack, they discover that John's uncle Stuart has been kidnapped; John concludes that the Circle of Ossus has returned. Ká:nien realizes that his sister, Nonahkee is in danger, too; but he is stunned to discover, after saving the Iroquois village in New England that she called home, that she and John were secretly in love. Afterwards Ká:nien consents to their love and joins John in taking down the Circle.

They fight with the French in the Seven Years' War. When Colonel Washington tells them that Warwick is a renegade, John agrees to track him down for the British. John leads his mercenaries and Washington's forces and destroy a Circle base in the Great Lakes. Warwick, the Circle's leader, is revealed to have killed Stuart, and flees to the western mountains. John and Ká:nien follow him, first earning the respect of the Great Plains tribes by gaining enormous amounts of experience from good deeds, then destroying a fortified Circle base in the mountains. They soon discover that Warwick and his soldiers have fled west, to act as a checkpoint for a Russian army. They realize that the Circle plans to capture British and French colonies and towns while their soldiers are at war with one another. With the help of some miners, they were able to bring down large rock bridges to stop the Russian large cannons from getting through. In the end John is shown setting up some dynamite. Warwick and several Circle soldiers approach him. Warwick attempts to kill John but when the Circle soldiers shoot at him, John dodges the bullets, jumps to the trigger, and pushes it, detonating the bridge, killing himself, the soldiers, and Warwick, and causing an avalanche. The avalanche buries the first few ranks of Russians, and effectively blocked off the rest. Ká:nien returns to his village, where he learns that his sister had given birth to John's son Nathaniel.

Later on Ká:nien assists his nephew Nathaniel initially in the effort to investigate claims that the Mohawk (his own tribe) and Seneca are working with the British. When ambushed by Mohawks, he and his nephew seek shelter with the Oneida tribe. The Oneida then help defeat the Mohawk and Seneca in the area. Upon returning to his village, Ká:nien and Nathaniel discover their home in ruins. The Hessians, who work for the British, have raided and captured many Iroquois, including Nonahkee, with the assistance of the Mohawk and Seneca. Nathaniel and Ká:nien proceed with Oneida support to liberate their tribesmen and Nonahkee.

Ká:nien decides to not take anymore interest in the American War of Independence and remains in his village with Nonahkee while Nathaniel leaves with a band of warriors to aid the Colonial cause.

Time flew past, and Nathaniel dies in old age, but Ká:nien remains vigilant and always keeps an eye on the Circle. One day he is watching Pierre Beaumont and Amelia Black going to the caves in a mountain pass, revealing that Beaumont is the new leader of the Circle of Ossus, Pierre then said he followed him for too long but Ká:nien had Cooper and Hussars with him. Then Ká:nien helps Amelia throughout the rest of Act III. Later, Ká:nien and Amelia destroy the Ossuary. Their troops rush in, Beaumont gets a broken leg, then he tackles Ká:nien . Beaumont kicks Amelia away, making her drop her shotgun. Beaumont rushes at Amelia, but she grabs the shotgun and shoots him. The Circle's stolen treasure subsequently become part of the Falcon Company's wealth.

Ká:nien uses a bow and arrow to fight, with a long range rivaling that of artillery, and can use Red Bear Arrow, which is similar to Crackshot Attack used by Explorers, but does less damage and has a much longer range.

Like other heroes, Ká:nien has many hit points, but if he falls, he will collapse instead of dying and needs to regenerate enough hit points to be rescued by allies. He can collect treasures, but unlike Explorers, cannot build Trading Posts and Town Centers.

John Black and Ká:nien watching a Russian convoy in the eighth scenario of Act II: Ice 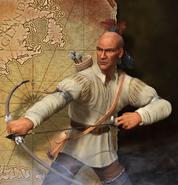