Age of Empires Series Wiki
Register
Don't have an account?
Sign In
Advertisement
in: Age of Mythology, Tale of the Dragon, Classical Age,
and 4 more

12 feet
The Junk is a Chinese naval military unit in Age of Mythology: Tale of the Dragon. Junks are good against hammer ships.

The oldest references to the Chinese sailing vessel known as the “junk” date back to the Han Dynasty (220 BCE-200 CE), although it is generally believed that the junk was in use even earlier. The term “junk” has many origins, including roots in the Portuguese “junco,” the French “junque,” the Dutch “jonk,” the Malay “jon,” and the Javanese “djong.” The junk is identified by its high stern, projecting bow, and square linen sails. The sails are spread and contracted in an action similar to that of collapsible Venetian blinds. Instead of a keel, the junk has a large rudder. Junks were integral in Chinese trade and exploration up until the nineteenth century. 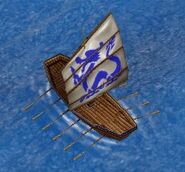 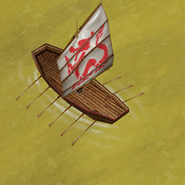