John Black is the protagonist of the Act II: Ice campaign in Age of Empires III.

In 1757, John Black's Mercenaries and his Iroquois friend Ká:nien are on their way to Brunswick, Black's uncle Stuart's colony, as he has called for help. The colony under attacked by the Cherokee where the Mercenaries and the colonists defended the town. After repelling the attacks, John and Ká:nien grew suspicious as the Cherokee had always been peaceful neighbors. They attempt to arrange a peace settlement. When they reach the village, they are ambushed by a squad of British regulars. While they were distracted, British army units landed by the undefended colony took it. After the Mercenaries counter-attacked, they discover that John's uncle Stuart has been kidnapped. As the colonists themselves were British, John concluded that the Circle of Ossus' return was the only possibly reason why the British military would attack their own colony. Ká:nien realizes that his sister, Nonahkee, is in danger, too due to their close friendship with John. In New England, British regulars under General Warwick attacked the village after the Iroquois refused to hand John to them. Then John Black's Mercenaries reached barely in time to Warwick's men from the rear. As the redcoats retreated to defend themselves the Iroquois launched a counterattacked. Trap between both sides, the British regulars soon withdrew.

John was reunited with Nonahkee who were lovers. The two discussed whether to tell Ká:nien their relationship but decided to put it aside as tensions were brewing between the British and French. Due to the actions of Warwick, Nonahkee reasoned that they should side with the French but John was distrustful of them.

Afterwards, Ká:nien consents to their love and joins John in taking down the Circle.

When the Seven Years' War, John Black's Mercenaries ultimately decided to join the French rather than risk Warwick who have his uncle Stuart. They aid the French army in a border war where they proved decisively in destroying the British fort. After the battle, a British officer named Colonel George Washington demanded why the Mercenaries were fighting for the French as John and many of them were British themselves. John replied that they would stand down if Warwick was handed over to them. Washington then told them that General Warwick is a renegade, as he had attacked the Iroquois without the authorization of the British Crown and was being hunted. John then agrees to track him down for the British government. John with Nonahkee and Ká:nien leads his mercenaries and Washington's regulars to destroy a Circle base defended by the elite Boneguard in the Great Lakes, crippling their naval capabilities. However, in the ruins of their base, John and Ká:nien found Stuart's beheaded. Angered, John swears revenge for his innocent uncle's murder and had Nonahkee return to New England. He also revealed their relationship to Ká:nien who despite his objection would not stand in the way. They pursue Warwick to the Rockies in what is now Colorado. There the duo encountered the Great Plain tribes under attacked by the Boneguard. The Mercenaries aided the tribes earning the respect by various good deeds. However Warwick never meant to conquer the plains and fled further west. They soon discover that the Boneguard have fled well into the west to act as a checkpoint for a massive Russian invasion to conquer the colonies. John and Ká:nien realize that the Circle plans to capture British and French colonies and towns while their soldiers are at war with one another. With the help of some miners, they are able to bring down several rock bridges to stop Russian army, especially heavy artillery, from advancing.

In the last cutscene, John is shown setting up some dynamite to close off one more passage when Warwick and several Circle soldiers approach him. Warwick attempts to kill John, but, when the Circle soldiers shoot at him, John dodges the bullets, jumps to the trigger, and pushes it, detonating the last rock bridge. The explosion kills John, the Boneguards, and Warwick, causing an avalanche that buries the advancing Russians. Ká:nien returns to his village, where he learns that his sister has given birth to John's son Nathaniel.

Amelia noted that John made more enemies in life: (fighting the Cherokee, the British, the Circle and the Russians) but he died a hero and the Black family was rewarded by the British, and the later the American government.

As the protagonist of the Act II: Ice campaign, John Black appears in every scenario. However, in the last scenario, he only appears briefly in the first part (where he is not controllable by the player), then appears in the final cutscene of the Act II campaign.

John Black fights with a bayonet and a rifle, and can use Hawk Eye, which is similar to Crackshot Attack used by Explorers but does less damage with a much shorter cooldown.

Like other heroes, John has many hit points, but if he falls, he will collapse instead of dying and need to regenerate enough hit points to be rescued by allies. Similar to Explorers, he can collect treasures and build Trading Posts, but cannot build Town Centers. 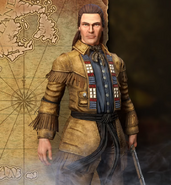 John as he appears in the Definitive Edition
Community content is available under CC-BY-SA unless otherwise noted.
Advertisement