Joan of Arc is a campaign in Age of Empires II. The campaign is based on the exploits of the real Joan of Arc (c. 1412 – May 30, 1431, French Jeanne d'Arc.) She was a French heroine who, at the age of 17, was pivotal in turning the tide of the Hundred Years' War in her nation's favor.

6
Joan of Arc is a cavalry hero. In the campaign, she is always a must-survive unit. In the first scenario (An Unlikely Messiah), she appears in her unmounted form, as Joan the Maid, in scenarios 2-5 she appears as Joan of Arc, and in the final scenario, A Perfect Martyr, she doesn't appear at all, as she was captured and burned at the stake after the previous scenario. She is also available in the Scenario Editor. As a hero, she cannot be converted and can regenerate health (only in The Conquerors onward).

Joan of Arc and her army in the fifth scenario

Joan of Arc in the Scenario Editor 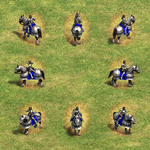 A group of Joan of Arcs in the Definitive Edition

Joan of Arc (right) next to her unmounted variant

Joan of Arc beta art in the Definitive Edition.

Contemporary portrait of Joan of Arc by Clément de Fauquembergue, in the protocol of the parliament of Paris, dated 10 May 1429

Joan and the jealous advisors

Near-contemporary portrait of Joan of Arc, painted after 1450, after Joan's recent death in 1431

The Joan of Arc campaign consists of 6 scenarios. The player plays as the Franks, and the player color is blue.