watch 02:34
Wiki Targeted (Games)
Do you like this video?
Play Sound

Myth Units (7)
Set Animals (3)
Jiao-Long is the main protagonist in the Tale of the Dragon campaign in Age of Mythology: Tale of the Dragon. He was tasked by Emperor Yao to investigate the sudden cataclysms that plagued the land and is quickly joined by Shun and Zhi.

Jiao-Long can regenerate 1.5 HP per second. Jiao-Long cannot be killed: if his HP reaches 1, he merely faints and can be resuscitated if approached by allied units.

Mysterious forces have upset the balance of Yin and Yang, and Emperor Yao's subjects are being harmed by natural disasters (such as floods and volcanic eruptions) and monsters. To investigate these disturbances, the Emperor sent his finest general, Jiao-Long and his son, prince Danzhu, to investigate and resolve the chaos.

Jiao-Long first meets with Shun, a compassionate leader that has brought peace and prosperity to multiple villages; he has been appointed to oversee the construction of a Dam that will protect the surviving inhabitants of a region at the Yellow River from further floods. When the Chinese workers eventually manage to finish the construction, after multiple attacks by hostile Lizards and War Salamanders, the two heroes head to the west, where they encounter some hostile mountain clans.

Jiao-Long and Shun fight their way through the mountain and with the help of some friendly peasants, they destroy the mountain base. Jiao-Long searches for Zhi's Temple nearby, but shortly after finding it, Zhi's temple turns into a Mysterious Hole, from where he tried to summon Dilong, the Earth Dragon, for Danzhu.

Eventually, the three heroes journey through Diyu (the Chinese Underworld) and the East Sea (where Ao Kuang's palace lies) and travel through the jungles of Southern China, to reach the altar of Pangu.

After Jiao-Long, Shun and Zhi help the Vermilion Bird, Danzhu spies on them and prepares for another attack, but again, his army is no match for Jiao-Long's forces. After Jiao-Long summons Pangu, Danzhu congratulates Jiao-Long as if he hadn't tried to kill him. Jiao-Long replies with "Your actions have spoken more than your words ever could. Do not expect a favorable report when I return you to the Emperor." 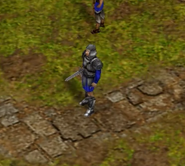 Jiao-Long in-game
Add a photo to this gallery

Retrieved from "https://ageofempires.fandom.com/wiki/Jiao-Long?oldid=279843"
Community content is available under CC-BY-SA unless otherwise noted.