Age of Empires Series Wiki
Register
Don't have an account?
Sign In
Advertisement
in: Age of Mythology, Tale of the Dragon, Myth units,
and 2 more

16 feet
The Jiangshi is a Heroic Age myth unit in Age of Mythology: Tale of the Dragon. It is available to the worshipers of Zhong Kui.

Jiangshis are strong in combat as a Heroic Age Myth Unit and well suited for buffing the strength of an army. Their armor is fairly low but their ability to steal hit points from their target increases their durability. Players may choose to command their Jiangshi into taking out a couple of enemy units and then direct them into attacking enemy buildings. Interestingly, their ability to steal hit points also works on buildings, meaning they can quickly heal themselves without taking damage and then resume fighting enemy units. If the enemy responds, players should make the most of their high speed and have them retreat to a safer area as concentrated attacks, especially from heroes, will quickly take out Jiangshis. Thankfully they are fairly easy to replace as they cost wood, a resource that's easier to obtain than food or gold in the Heroic Age. 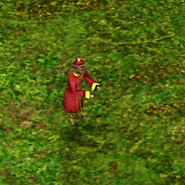 Wikipedia has an article about:
Jiangshi
Community content is available under CC-BY-SA unless otherwise noted.
Advertisement