Alive (as of No Empire Lasts Forever)

To Finish a Fleet

Bruce Locke
Captain Jian Huang is the main protagonist of the Act II: China campaign in Age of Empires III: The Asian Dynasties.

Captain Jian Huang was born a Hui (Muslim Chinese), just like the famed Zheng He. Admiral Jinhai, the current emperor's spoiled nephew, looks down on Huang because of his lower rank.

At the start of the campaign, the experienced, muscle-bound sailor Lao Chen is assigned to work with Huang. After defeating Wokou Pirates who terrorize imperial shipyards, Captain Huang, Jinhai, and company sail to Kozhikode (Calicut) in India, where they are betrayed by the Zamorin.

The fleet sails on to the west, but a storm blows their ships to the "New World" (the Yucatán region). After most of the scattered ships and crew are recovered, Admiral Jinhai and some of his crew disappear. Once he rescues some hostages from hostile Aztecs, Huang finds out that Jinhai intends to rule the Aztecs, who recognize the admiral as a god, and sets out to stop him. In the ensuing battle, Jinhai and his mutineers are defeated and killed.

Captain Huang, Chen, and the remaining crew scour the shores to dispose of evidence of their arrival. They then leave the Yucatán shores and never tell anyone about their discovery.

Huang uses a bow and arrow to fight from a long range, although he is not as strong as his companion Lao Chen. He can use Heavenly Fire to inflict AOE damage and has Critical Strike similar to the Shaolin Master. In the A Rescue in the Wilderness scenario, Huang can use Fleet Explosives to instantly destroy trees.

Like other heroes, Huang has many hit points, but if he falls, he will collapse instead of dying and need to regenerate enough hit points to be rescued by allies. Similar to Shaolin Master, he can collect treasures and build Trading Posts, but cannot build Town Centers.

Heavenly Fire: Captain Huang throws a bomb that does 250 (750 against buildings) siege damage to enemies in an AOE of 3. 120 seconds cooldown.

Fleet Explosives (only available in A Rescue in the Wilderness): Captain Huang throws a bomb that destroys trees in an AOE of 4. 10 seconds cooldown. 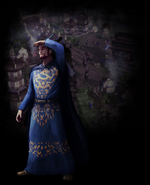 Jian Huang art for the The Asian Dynasties expansion
Community content is available under CC-BY-SA unless otherwise noted.
Advertisement