Jean Parisot de Valette (1495 - 1568) is the AI personality of the Maltese in Age of Empires III: Definitive Edition. He was Grand Master of the Order of Saint John from 1557 to 1568 and commanded the successful repulsion of the Ottomans at the Great Siege of Malta in 1565 before founding the city of Valletta in 1566.

Parisot is a reserved, quiet leader who observes the code of chivalry. His dialogue is full of knightly ferocity and piety, and he often reuses Morgan Black's lines from Act I: Blood.

Parisot as an Ally[]

Parisot as an Enemy[] 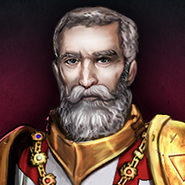