Age of Empires Series Wiki
Register
Don't have an account?
Sign In
Advertisement
in: Age of Empires II, Huntables, The Conquerors

5-10
The Javelina is a huntable animal in Age of Empires II: The Conquerors. It has 75 hit points, and is much more difficult to kill than Deer. It is almost essential that Villagers take it on in groups, as the life of the lone Villager will be compromised attacking it.

The Javelina provides 340 food, considerably more than most huntable animals. It is a functionally and cosmetically identical American version of the Wild Boar, replacing it in American maps.

The boar sprite as seen in Age of Empires II: Definitive Edition. 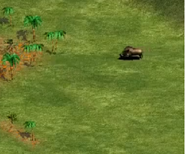 A Javelina foraging in the Cenotes.
Community content is available under CC-BY-SA unless otherwise noted.
Advertisement