The Javanese Spearman is a revolutionary melee heavy infantry in Age of Empires III: Definitive Edition that is unique to Indonesia and can be trained at the Barracks, Fort, Galleon/Fluyt, and Wokou Junk.

Revolting to Indonesia will turn all Settlers into Javanese Spearmen instead of Revolutionaries, though they can still be trained in place of Settlers.

In terms of stats, Javanese Spearmen are mix between Pikemen and Halberdiers:

As Javanese Spearmen are unique to Indonesia, only technologies that their base European civilizations have access to are shown in the following table:

As Javanese Spearmen are unique to Indonesia, only their base European civilizations' cards and other civilizations' TEAM cards are shown in the following tables (for the base civilization, non-TEAM cards will only be applied if they are sent before revolting):

Depending from which civilization Indonesia revolted from, the Javanese Spearman uses either Dutch or Portuguese Pikeman's dialogue files.

Throughout the Dutch colonialization of the Indonesian archipelago, the people of Java had mounted several uprisings and rebellions, although none of them were successful. Among the most famous rebellions mounted by the Javanese people are the Java War, or better known to the present-day Indonesians as the "Diponegoro War" after their leader, Prince Diponegoro. During the war, the Javanese peasantry were supportive of Diponegoro's cause, with many joining the ranks of the rebel army using whatever they have as a weapon. Later on the rebels would adopt guerrilla warfare which proves to be effective in inflicting heavy personnel and materiel losses for the Dutch. The rebellion was put down after the Dutch resorted to using trickery to capture Diponegoro and exiled him to Sulawesi.

It should be noted that the sharpened bamboo spear used by the Javanese Spearmen (and to a lesser degree, the Chinese/Japanese Sentry), is anachronistic, as it would be used during and after World War II and fashioned after the Japanese takeyari, used to repel paradropped infantry.[1] A more historically accurate choice would be iron-headed spears 12 to 14 feet in length, similar to pikes, used by Javanese warriors with great dexterity.[2][3] 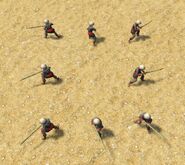