"An elite Indian mercenary armed with a lance. Good against archers, skirmishers, and artillery."
—In-game description

The Jat Lancer is an Indian mercenary cavalry unit featured in Age of Empires III: The Asian Dynasties.

The Jat Lancer can be sent as a shipment from the Indian Home City or trained from the Monastery with the Atonement Home City Card. The Jat Lancer is a more expensive (resources and population) heavy cavalry unit that does higher base damage than the typical Lancer, has higher hitpoints, better siege damage, more ranged resistance and the same multiplier against infantry as Spanish lancers using the Caballeros card. They are extremely effective at destroying buildings such as Outposts and Town Centers, they are also effective versus all infantry.

The Jat Lancer can effectively use Trample Mode, losing only 5 damage rather than the usual 7 damage associated with other cavalry.

In essence, only the Indians can ever possibly field Jat Lancers, no other nation can obtain them since it is not coded to be available at a Saloon or Monastery. However, Jat Lancers are also available in the China campaign by selecting India as an ally from the Consulate.

As Jat Lancers are unique to the Indians, only technologies that they have access to are shown in the following table:

As Jat Lancers are unique to the Indians, only their cards and other civilizations' TEAM cards are shown in the following tables:

"The Jat people are a large ethnic group living in the Punjab, Western Uttar Pradesh, Haryana, Delhi and Rajasthan states of India. They share no single faith, language, or series of customs, but are linked by a common history. Jats reached Egypt with Muslim conquerors, lived in Afghanistan before the Muslims, invaded China with the Mongol army, and even posed a threat to Tamarlane in Persia and Uzbekistan. The first mention of the Jat people in Indian literature occurred in 900 BCE in the Sanskrit epic, "Mahabharata". They are referred to as a democratic federation, or a collection of tribes.

During the occupation of India by British forces, the Jats were designated a martial race, or an ethnic group that based on exhibited qualities was predisposed to fighting. The British recruited native soldiers heavily from these particular populations. Among the most distinguished were the 14th Murray’s Jat Lancers. Cavalry officer Badlu Singh was awarded the Victoria Cross for assaulting a machine gun placement during a World War I assault in Palestine." 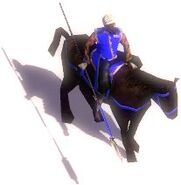 An in game Jat Lancer

A Jat Lancer from Murray's Jat Horse Regiment
Add a photo to this gallery
Retrieved from "https://ageofempires.fandom.com/wiki/Jat_Lancer?oldid=259500"
Community content is available under CC-BY-SA unless otherwise noted.