7
Jarl is a cavalry hero available in the Scenario Editor in Age of Empires II: The Forgotten. He is based on a generic Norse commander.

Prior to the Definitive Edition, the Jarl was represented by a Tarkan, but with better stats (he was shown carrying a torch). In the Definitive Edition, he has a unique appearance and chucks axes which deal melee damage at range, similar to the Throwing Axeman. Like other cavalry, the Jarl is affected by all upgrades that affect cavalry as well as any other bonuses that affect them. As a hero, he cannot be converted and can regenerate health.

A notable appearance of a Jarl is in the York scenario, as part of a landing party that must establish a base in the British Isles, before the Great Heathen Army arrives. He should be used to fight Monks, as he cannot be converted and can also quickly kill them with his strong attack. 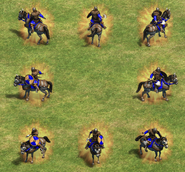 Jarl in the Definitive Edition
Community content is available under CC-BY-SA unless otherwise noted.
Advertisement