The Janissary is a ranged heavy gunpowder infantry in Age of Empires III that is unique to the Ottomans and can be trained at Barracks, Forts, and Galleons.

The Janissary fulfills the role of the Musketeer from other civilizations, though it costs more food than a Musketeer. They are one of the three heavy infantry units available to the Ottomans, the other two being the Grenadier and the Nizam Fusilier. They have significantly more hitpoints than Musketeers.

Although the Janissary marches slowly and is weak against artillery, Skirmishers, and archers, it is strong against cavalry and Shock Infantry. The Janissary fights at range with a musket and does slightly less ranged damage than a Musketeer and uses a yatagan (Turkish sword similar to Greek kopis and signature weapon of the Janissary) for melee attacks, doing less damage to cavalry than a Musketeer, but more damage to other units. Like the Musketeer, Janissaries can be upgraded to the Imperial level.

In the early Ages, Janissaries combined with Abus Guns form a somewhat expensive but very powerful combination as artillery such as Falconets is not available until the Fortress Age. Janissaries will devastate any cavalry that come near the group while the Abus Guns will take out any infantry they meet.

Even if the player does not plan to make Janissaries late in the game (because of the presence of highly upgraded artillery), the player should keep about 10 on hand if the "Battlefield Construction" card is in the player's deck. With this card, Janissaries can build Barracks, Stables, and Artillery Foundries to bring even more pressure to a weakened opponent immediately, and not have to bring a Settler that runs the risk of getting killed on the way to the battlefield to build military buildings. They do build far slower compared to a Settler, so this is why bringing 10 of them will speed up the process (8 can focus on constructing one building while the other two construct others or replace them if they die).

In the Age of Empires III campaign, Janissaries are led by Sahin The Falcon to attack Morgan Black and the Knights of St. John, battling them for the majority of the campaign. However, with the threat of The Circle, they later assist Morgan in stopping them.

As Janissaries are unique to the Ottomans, only technologies that they have access to are shown in the following table:

As Janissaries are unique to the Ottomans, only their cards and other civilizations' TEAM cards that are shown in the following tables: 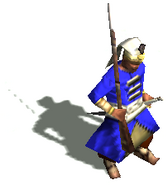 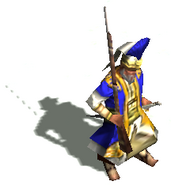 A Fishing Boat with three Janissaries

Jannissary in the original version and Definitive Edition