The Janissary is the unique unit of the Turks in Age of Empires II. It is a gunpowder unit with high attack and melee armor.

Janissaries can be upgraded to Elite Janissaries in the Imperial Age.

A related unit, the Royal Janissary, is only available in the Scenario Editor. It has exactly the same stats as the Elite Janissary, apart from the HP.

Janissaries play similarly to Hand Cannoneers, but with superior statistics. They are fragile but have a devastating attack. In groups they can send out a volley that will kill or severely injure enemy units that are too close. They are especially strong against infantry, but Hand Cannoneers are superior against infantry, as they have a +10 attack bonus against infantry that Janissaries lack. They have some weaknesses against archers and cavalry due to the former's ranged attack and the latter's speed. In great numbers, however, Janissaries can kill them before they do too much damage.

Janissaries in the Castle Age can be particularly deadly due to their 8 range, allowing them to outrange Town Centers and Mangonels. They can destroy a Tower Center in sufficient numbers if given enough time. That said, they cannot outrange Castles or towers, and using them aggressively can leave them vulnerable to overextending and getting caught out of position by Skirmishers or Knights. Also, while they can outrange a Mangonel in the Castle Age, a shot from one will still deal devastating damage to Janissaries if it connects.

Up close, Janissaries can be killed easily due to their low hit points, but any unit attacking a dense formation of Janissaries up close is vulnerable. Janissaries can kill much more easily at close range due to their low accuracy at range. Therefore, siege weapons are a threat to them, as a single shot from an Onager can devastate a formation. Bombard Cannons also work very well against Janissaries. Archers are also an issue, because they can take advantage of the Janissary's low accuracy, low pierce armor, and low Rate of Fire.

As Janissaries are unique to the Turks, only technologies that are available to them are shown in the following table: 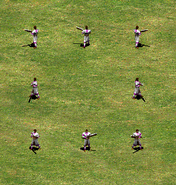 A group of Janissaries

Janissary in the HD Edition and Definitive Edition

Painting of a group of attacking Janissaries

A musket-wielding janissary in Ottoman miniature 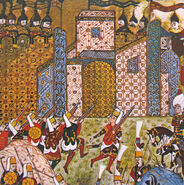 Ottoman Janissaries and the defending Knights of St. John, Siege of Rhodes (1522)

Giannizzero Illustration by Cesare Vecellio, depicting a later Janissary in 1589 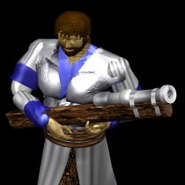 A render of the original Janissary model