Jan Zizka is a campaign in Age of Empires II: Definitive Edition - Dawn of the Dukes that focuses on the successful Bohemian military leader Jan Zizka (Czech: Jan Žižka z Trocnova a Kalicha) (c. 1360 – 11 October 1424). He was nicknamed "One-eyed Žižka", having lost one eye in battle. Jan Žižka led Hussite forces against three crusades and never a lost single battle despite being completely blind in his last stages of life.

The effectiveness of his field artillery against the royal cavalry in this battle made it a successful element of Hussite armies. Žižka's tactics were unorthodox and innovative. In addition to training and equipping his army according to their abilities, he used armored wagons fitted with small cannons and muskets. He had to quickly train peasants to repeatedly face highly trained and armored opponents who usually outnumbered his own troops.

Jan Zizka is a cavalry hero with a unique appearance. He is armed with a war mace. He can reduce the armor of enemy units that he attacks (like the Obuch). As a hero, he cannot be converted and can regenerate health.

The Jan Zizka campaign consists of 6 scenarios. The player plays as the Bohemians, and the player color is cyan.

The campaign is narrated by Jan Zizka himself. 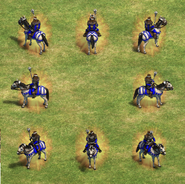 Many views of Jan Zizka

Jan Zizka (right) as seen in the expansion's official art