×3.0 vs. Heavy cavalry and Heavy infantry

The Jagunço is a revolutionary outlaw in Age of Empires III: Definitive Edition that is unique to Brazil. It is identical to a Comanchero, but is armed with a rifle, making it more identical to a Rifle Rider.

As Jagunços are unique to Brazil, only technologies that their base European civilizations have access to are shown in the following table:

As Jagunços are unique to Brazil, only their base European civilizations' cards and other civilizations' TEAM cards are shown in the following tables (for the base civilization, non-TEAM cards will only be applied if they are sent before revolting):

Jagunços are fugitive criminals or people with a violent background who lent themselves into the service of influential people such as farmers and politicians to provide protection and security of their estates and slaves. Consequentially, jagunços are often sheltered from the law enforcement by their employers. Their name is taken from the Portuguese zarguncho which refers to a short lance-like weapon of African origin.

The term would later become, in northeastern Brazil, a synonym for cangaço. 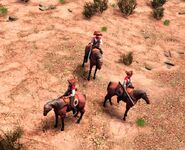