Jaguar Warriors have a high anti-infantry attack bonus. That enables them to defeat any other infantry unit in one-on-one combat apart from Teutonic Knights, though Jaguar Warriors will win in large army battles. However, they are not as effective against other units, especially archers. As with most infantry, they also struggle against heavy cavalry.

Jaguar Warriors have an ideal mate with the Eagle Warrior as the Eagle Warrior can cover most of the Jaguar Warriors' weaknesses since they have an attack bonus against Monks and cavalry, and are very effective against archers. Also, the Jaguar Warrior covers the Eagle's main weakness which is infantry, so they make an excellent team and are very common amongst Aztec armies. Monk support for both units should not be disregarded. The biggest threat to the Aztec infantry combo is Hand Cannoneers, so Aztec players should consider using Onagers to counter them if they show up. Cataphracts can also decimate Aztec infantry since they lack Halberdiers, but Monks can convert them if needed.

When facing Samurai, the outcome will depend on whether or not the game is using expansion settings or not. If playing in The Conquerors settings, Samurai will always win a fight (barely) with Jaguar Warriors due to their fast attacks and bonus damage against unique units. If playing any HD expansion, the outcome will favor whichever unit attacks first, since the Elite Jaguar Warrior's attack bonus against infantry is +11, not +10.

"Another rank of Aztec fighter was the Jaguar Warrior, who was more heavily armed and armored than the Eagle Warrior. Their role was probably to be the heavy infantry of the army and to engage the enemy main body. They likely had the advantage in combat against lighter troops that were caught off-guard or foolish enough to engage the heavier Jaguar Warrior. These warriors wore jaguar headpieces and clothing that represented jaguar fur. The jaguar was chosen as the totem for warriors because it was the fiercest predator in the Central American jungles. In combat, they used an obsidian-bladed sword known as a macana. Although it lacked the penetration power of steel weapons, the macana was able to keep a razor-sharp edge.

The best of the Jaguar Warriors were promoted to Elite status. These were veterans of demonstrated skill who carried the best weapons and were the best fighting soldiers available." 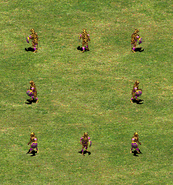 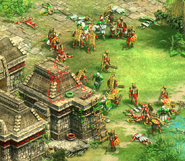 Jaguar Warriors in the Definitive Edition
Add a photo to this gallery
Retrieved from "https://ageofempires.fandom.com/wiki/Jaguar_Warrior?oldid=246756"
Community content is available under CC-BY-SA unless otherwise noted.