Age of Empires Series Wiki
Register
Don't have an account?
Sign In
Advertisement
in: Age of Empires III, Infantry, Fortress Age,
and 2 more

The Jaguar Prowl Knight is a melee heavy infantry unit in Age of Empires III: The WarChiefs that is unique to the Aztecs and can be trained at the Nobles' Hut. It is the second most powerful melee unit of the Aztecs after the Skull Knight.

The Jaguar Prowl Knight is a very powerful and fast infantry unit of the Aztec civilization with a lot of hit points and attack and is very effective against heavy infantry and heavy cavalry units. They also have the stealth ability, which makes them slower (half speed) but completely invisible to most enemies.

These units are extremely powerful. Their biggest weaknesses are Skirmishers and artillery, which Coyote Runners should take care of. They have multipliers against most melee units, making them extremely good as meat shields against cavalry, as well as melee infantry such as Samurai. Grenadiers are very vulnerable in melee (due to heavy infantry classification) but a fair counter at range. Skirmisher units and artillery are extremely dangerous if they attack at range, but will fall if they get too close.

It can be thought of as a Halberdier/Skirmisher hybrid.

The Jaguar Prowl Knight is one of the Aztec civilization's knight units; as such, it is trained at the Nobles' Hut along with the Arrow Knight and the Eagle Runner Knight.

As Jaguar Prowl Knights are unique to the Aztecs, only technologies that they have access to are shown in the following table:

As Jaguar Prowl Knights are unique to the Aztecs, only their cards and other civilizations' TEAM cards are shown in the following tables:

The Jaguar Prow Knight from the in-game history section 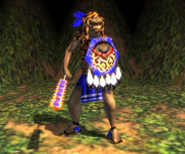