The Jaeger (correct German: Jäger; both singular and plural) is a mercenary ranged infantry unit in Age of Empires III. It is essentially a stronger version of the Skirmisher.

The Jaeger is best used to counter heavy infantry; they benefit from the counter-infantry tech from the Arsenal making them very strong against any heavy infantry. As all skirmishers, they are countered by hand cavalry and artillery so they should be guarded well, ideally by ranged cavalry such as Dragoons.

The Jaeger shipment that some civilizations get in the Fortress Age is a good way of repelling large numbers of heavy infantry units. Due to their low cost and population use, a civilization should replace their normal Skirmishers with them as they have much better stats. However, the French and Germans have stronger Skirmishers, so when dealing with an army of cavalry, Jaegers should be used to support while other units fight the cavalry.

In Act II: Ice of the original Age of Empires III, John Black employs Jaegers as part of his mercenary force. In some campaign scenarios, the player starts the game with Jaegers at their disposal, or can have them shipped later from their Home City, provided they did not remove the card which ships Jaegers from their deck.

The Jaeger is one of the units that is featured in the very first stages of the Act I: Fire campaign as part of the Hessian forces under Colonel Kuechler. This time, they appear as part of the enemy forces.

The Jaeger, similar to the units of the Germans, speaks modern Standard German with a standard theater pronunciation ("Bühnendeutsch"), although this does not represent the form of German spoken in the Age of Empires III timeframe. 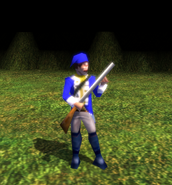