Age of Empires Series Wiki
Register
Don't have an account?
Sign In
Advertisement
in: Age of Empires II, King heroes, Civilian units, Lords of the West

6
Jacqueline of Hainaut (15 July 1401 – 8 October 1436) is a civilian hero unit in Age of Empires II: Definitive Edition - Lords of the West. Her appearance is based on a Queen.

She has no form of attack whatsoever, meaning that all she can do is simply move around and garrison inside buildings. As a hero, she cannot be converted and can regenerate health.

She appears as a player (but not the unit itself) in the scenarios Unholy Marriage and The Hook and Cod Wars in the The Grand Dukes of the West campaign.

Jacqueline was the last Wittelsbach ruler of Hainaut and Holland. Following her death, her estates passed into the inheritance of her cousin (through her mother's side) Philip the Good, Duke of Burgundy. 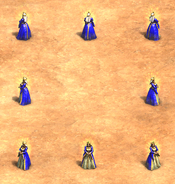 Jacqueline seen on the right in the official release box art of Lords of the West
Community content is available under CC-BY-SA unless otherwise noted.
Advertisement