Age of Empires Series Wiki
Register
Don't have an account?
Sign In
Advertisement
in: Age of Empires II, Ivaylo, The Last Khans,
and 2 more

Ivaylo is a campaign in Age of Empires II: Definitive Edition. It is based on the rise and fall of Ivaylo of Bulgaria (Bulgarian: Ивайло, also spelled Ivailo; died 1281). Ivaylo, also known as Bardokva or Lakhanas, was a Bulgarian peasant who became the leader of a peasant uprising in 1277 which ultimately resulted in him becoming the tsar of the Second Bulgarian Empire. During Ivaylo's short reign from 1278 to 1279, he managed to defend Bulgaria from Byzantine and Mongol invasions, but was forced into exile to the Mongols thanks to the treachery of the Bulgarian nobles (bolyars). Unfortunately, the Mongols later assassinated Ivaylo under the orders of Nogai Khan for being an enemy of the Byzantine emperor Michael VIII Palaiologos.

Ivaylo's legacy lives on when Bulgaria was controlled by the Ottoman Empire, where the hajduks are said to be inspired from folk songs and traditional legends about him, and Marxist historians even used Ivaylo as an example of early anti-feudal/bourgeois revolutionary.

Turn into a Dismounted Ivaylo upon death

5
In the game, Ivaylo appears as a melee cavalry hero unit with his own unique sprite and icon. He bears no armor and wields a sword and a small square shield. When killed, Ivaylo rises again as a similarly unique infantry hero, much like the Bulgarian unique unit, the Konnik, turns into a Dismounted Konnik when killed.

The Ivaylo campaign consists of 5 scenarios. The player plays as the Bulgarians, and the player color is blue.

The campaign is narrated by the exiled Maria Palaiologina, the wife of Konstantin Tikh—the very tsar who was killed by Ivaylo during his uprising—which Ivaylo marries after he becomes the Tsar of Bulgaria, as she told the story to her unnamed daughter from Ivaylo. 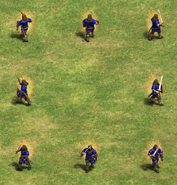 Many views of Ivaylo 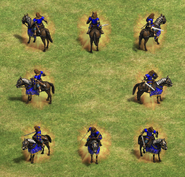 Many views of Ivaylo on horseback