Fred Tatasciore
Ivan the Terrible (1530 - 1584) is the AI personality of the Russians in Age of Empires III. He was Grand Prince of Moscow from 1533 to 1584 and is voiced by Fred Tatasciore.

Ivan is supposed to be in his later years. He often makes sinister comments and will frequently threaten the player.

Ivan is a fairly easy AI to fight; he is considerably tougher than Isabella but not as strong as the other AIs.

The Tsar favors his special infantry units like the Strelet and cavalry units like the Cossack. Ivan builds most of his Blockhouses early in the game for a ready defense against invaders, as well as a way to mass-produce infantry. However he never upgrades the Blockhouses, making them somewhat ineffective in the later ages.

Because of the Russians unique training mechanic of training infantry (who are weaker than those from other civilizations) and settlers in groups rather than individually, Ivan is usually the last AI to advance to the Industrial and Imperial Ages, which can easily get him killed when fighting other opponents who are already at such Ages. This results in Ivan having to devote more settlers for resource gathering which can impede his military progress.

Despite this disadvantage, should Ivan be able to survive into late-game, he can be a strong foe to deal with. Ivan's armies usually consist of upgraded Halberdiers and Falconets, making them strong against infantry and cavalry, but poor against artillery. Strelets and Musketeers are relatively uncommon at this stage, and cavalry tend to be produced only in minority. Due to the Russian economy setup, Ivan can continually send out wave after wave of units from the Blockhouses, although a relatively strong anti-infantry army can dispose of them with ease.

Ivan as an ally[]

Ivan as an enemy[] 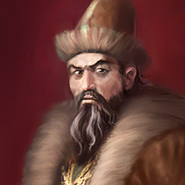