Age of Empires Series Wiki
Register
Don't have an account?
Sign In
Advertisement
in: Age of Empires III, Gunpowder infantry, The Asian Dynasties

The Irregular is a ranged infantry in Age of Empires III: The Asian Dynasties that is unique to Asian civilizations (Chinese, Indians, and Japanese) and can be spawned through Town Defense at Town Centers. It functions identically to the Militiaman and Warrior.

The Indian Irregular has a different appearance to the Chinese and Japanese ones, but are statistically identical.

Like Militiamen, Warriors, and Sentries, Irregulars quickly lose hit points over time, which only stops when they have only 1 hit point remaining. Any damage taken after that will kill them, making them almost useless once this occurs.

Irregulars are a good tool for quickly defending Town Centers and also useful in temporary battles or to react quickly to an immediate crisis. They are also effective in large infantry armies due to their good attack and being protected by the numbers around them.

Players can essentially create endless armies of Irregulars by having their Monk and Villagers continually build Town Centers and deploying Irregulars from them. However, given their health degeneration and the time it takes to build a Town Center (unless a Town Rickshaw is assisting), it is not recommended to do so.

The Chinese have the Boxer Rebellion Home City Card which makes their Sentries and Irregulars no longer lose hit points over time, as well as Village Defense which allows their Villages to call a smaller pack of Irregulars. This allows them to be included in an army for a relatively low cost. 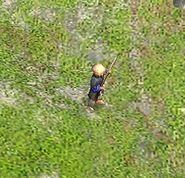 A band of 4 Indian Irregulars
Community content is available under CC-BY-SA unless otherwise noted.
Advertisement