The Ironclad is a military ship in Age of Empires III: The WarChiefs that is unique to revolting European civilizations and can only be shipped from the Home City.

In the Definitive Edition, Ironclads are also available to the United States and Mexicans, instead of the Frigate and the Monitor. They can be trained at the Dock once the Industrial Age is reached.

Ironclads are a faster and swifter firing version of a Monitor with diminished range, line of sight and hit points (versus a fully upgraded Monitor). They are a mixture between the Frigate and the Monitor; as a result it is merely average at both roles. Both ships out perform the Ironclad in their specific roles. Its reduced range puts it within firing range of Culverins, Light Cannons, and Hand Mortars along a shoreline, along with the usual Mortars and Morutaru artillery units. The Ironclad, like the Monitor, will be helpless in naval warfare unless supported by other ships as even a few Caravels or Privateers can severely damage the vessel.

Though it is fast for what it is, the Ironclad is still much slower than the majority of other warships and will have a hard time catching fleeing ships. This weakness can easily be exploited by an enemy who constantly rotates cheaper, lower hit point vessels back and forth from Docks (for purposes of repairs) while fighting the ironclad and its support fleet.

The Ironclad upgrade is only available to the United States and Mexicans.

As Ironclads are exclusive to revolutionary European civilizations (and the United States and Mexicans since the Definitive Edition), only technologies that their base civilization have access to are shown in the following table:

As Ironclads are exclusive to revolutionary European civilizations (and the United States and Mexicans since the Definitive Edition), only their base civilization's cards and other civilizations' TEAM cards are shown in the following tables (for the revolting player themselves, non-TEAM cards will only be applied if they are sent before revolting):

The Naval Gunners card is also available to the United States. 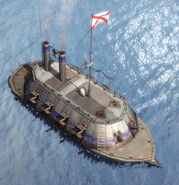 Ironclads in the mist

An Ironclad helps Japan to victory

Two Ironclads next to a Caravel
Community content is available under CC-BY-SA unless otherwise noted.
Advertisement