Age of Empires Series Wiki
Register
Don't have an account?
Sign In
Advertisement
in: Age of Empires III, Fortress Age, Mercenaries,
and 3 more

The Iron Troop is a Chinese mercenary unit featured in Age of Empires III: The Asian Dynasties.

The Iron Troop is a heavily armored archer, with exceptional ranged resistance, and attacks quickly with a bow and arrow with extra damage to heavy infantry and light cavalry. It also has a better melee attack than most ranged infantry.

The Chinese Atonement card allows Iron Troops to be trained from the Monastery, similarly to how the European Dance Hall card allows players to train Ronin from the Saloon. They can also be rescued from certain treasures on Chinese maps, such as Mongolia.

As Iron Troopers are unique to the Chinese, only technologies that they have access to are shown in the following table:

As Iron Troopers are unique to the Chinese, only their cards and other civilizations' TEAM cards are shown in the following tables: 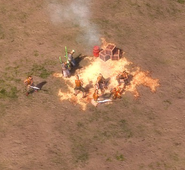 A treasure consisting of 2 Iron Troops guarded by Smugglers