The Iron Flail is a melee heavy cavalry in Age of Empires III: The Asian Dynasties that is unique to the Chinese and are trained as part of Forbidden Army and Imperial Army.

The Iron Flail is a powerful heavy cavalry available to the Chinese. It behaves similarly to the Naginata Rider, in that it possesses a multiplier against ranged infantry such as Skirmishers (please note that this does not include true light infantry such as Coyote Runners). The thing that sets the Iron Flail apart is that it has a splash damage attack, making it especially effective vs massed infantry and an exceptional raider as well. If Double Faced Armor is shipped, it boosts the range resist up to an impressive 41%, allowing it to tank an incredible amount of ranged fire, even allowing it to stand up to ranged cavalry for a short time.

Due to the Iron Flail's fairly low base damage, it is quite poor against other cavalry and not especially quick at killing artillery. Fortunately, to compensate, it has a high amount of hit points, making it still a valuable unit to round out the Chinese army.

The Iron Flail is automatically upgraded to Disciplined (+20% hit points and attack) in the Fortress Age.

As Iron Flails are unique to the Chinese, only technologies that they have access to are shown in the following table:

As Iron Flails are unique to the Chinese, only their cards and other civilizations' TEAM cards are shown in the following tables: 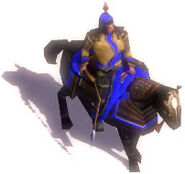 The Iron Flail icon from the website
Community content is available under CC-BY-SA unless otherwise noted.
Advertisement