The Irish Brigadier is a mercenary heavy infantry unit in Age of Empires III: Definitive Edition - Knights of the Mediterranean.

The Irish Brigadier is a heavy ranged infantry based on the Musketeer. It is effective against cavalry and Shock Infantry in melee combat, but vulnerable against Skirmishers and artillery.

Compared with the Musketeer, the Irish Brigadier has more attack, hit points, and melee resistance, but trains slower and costs only coin. Irish Brigadiers are cheaper than most mercenaries and take one population space. Additionally, they deal more damage against cavalry and shock infantry due to their increased melee attack and multipliers. Since they are available in the Commerce Age, they can fulfill the role of Musketeers for civilizations that lack of these units, like the Dutch or the Germans. However, Irish Brigadiers are weak compared to other mercenary Musketeers like the Highlander or the Fusilier, who have more hit points and attack. Therefore, players would favor these units over Irish Brigadiers as soon as they age up to the Fortress Age.

The Incas can obtain Irish Brigadiers as one of the 8 random mercenary units after researching Multinationalism. 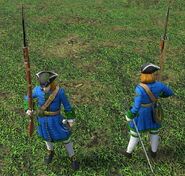