Fires of Calcutta
Into the Punjab is the first scenario of Act III: India in Age of Empires III: The Asian Dynasties.

It starts off with the cinematic "A spreading Fire", and shows the turmoil and conflict going over the Indian people about the British. It introduces the player to Lieutenant Nanib Sahir, and his struggle to calm down his people from British rule as well as Colonel Edwardson, a British officer who is Nanib's superior officer.

It would be wise to use the turtle strategy and to build Castles and Walls along the cliffs and edges of the colony, as there will be constant attacks from the native rebels. They will come in large waves and kill Villagers with ease. If the player obtains an European Settler from treasure and select Russian in the Consulate, after sending the Blockhouse Wagon shipment the player can build 7 of them using that specific European Settler. The Fort Wagon is also a good idea.

Once defensive buildings are built, the player can fight off the enemy units. The player can also start building their economy, military, and age up.

Once the player reaches close to the Industrial Age, if they amassed a large of army, They can start advancing towards the rebels' land and destroy all the Saltpeter sites. Make no mistake however, this scenario is often difficult due to the stiff resistance and military size of the rebel Indians. Large numbers of enemy Sowar and Urumi will often put up a fight and become a threat to the player's infantry.

Nanib confronts an Anti British Arsonist before the scenario

The player's starting position with bountiful resources nearby

Raiding one of several enemy settlements 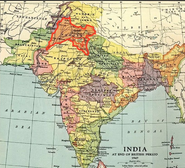