Into the Caves is the second scenario of Act I: Blood in Age of Empires III. The knights must wipe out the remaining threat to the island.

As shown in the cutscene, Morgan Black wants to find any remaining Ottomans and soon finds Sahin The Falcon making a swift retreat. They have a short conversation about the future of the knights and Sahin gives an annoyed Morgan the nickname "Frenk" before he departs. Later Alain informs Morgan that pockets of Ottomans are located to the east and so Morgan orders his men to follow him. Bringing with them a bombard captured from the enemy, in the event they will need it's firepower.

The player still does not have access to the Home City, nor can they send for shipments, much like the previous scenario. Any experience earned will be saved for later, and the player does still level up the Home City.

There are 5 treasures on the map, some of which are guarded.

The player begins under attack, though the bombard proves the player's greatest weapon repeatedly during this battle. The town begins moderately sized. Equipped with two Outposts, two Barracks, a Field Hospital and some Houses along with 11 Settlers and a single fishing ship. It's not overly important to start building more right away.

The strategy runs mostly on the initial units the player saves, the Bombard, 15-20+ trained Crossbowmen, and the high siege damage Swiss Pikemen the player saves. It's not important to earn large amounts of experience in the campaign, since the player won't be able to Build a Deck like in skirmishes. Any new cards the player unlocks will not be able to be switched out for inferior cards, the player is stuck with both. Furthermore, if the player reaches the maximum number of cards allowed in a single age line (9) the next card purchased for that age will push one off the list (can never be used again), maybe even one the player wanted to keep. For this reason it's best to know what's most useful so the player can precisely take the cards the player wants for the ages they want (with or without cheats). The trick below (leaving the scenario running) is one way to "buy" a greater number of Home City Cards (when the HC becomes active) with a time investment instead of a cheat code.

Note: Enemy settlers will typically flee into the cave, or to the gold deposit north of the treasure X in the first picture.
Note: The ship treasure wreck has 1000 coin, 500 food and 500 wood available to collect in crates.
Note: The Ottoman Mosque near their Dock has a similar bounty of resources available, with 2,000 coin and 1,500 food. There is also a pile of 600 wood near the cave entrance that can be quickly stolen if the player rushes up there.

Sahin attempts to make peace with Morgan and the Knights of St. John

Alain gives new orders to Morgan and his troops 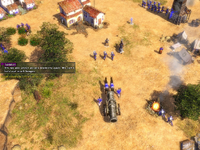 Upgrade the Crossbowmen at the Barracks, and train 15-20 more while finishing off the Ottomans attacking the base. Heal any wounded units at the Field Hospital and priest. Head northeast (ignoring the treasures and caches) and attack at around 4 minutes with the bombard in tow.

The attack at 00:06:44, the Town Center wagon almost escaped but look closely to notice a cannonball chasing it. It's important to stop this wagon from making it into the cave, they can attempt to rebuild otherwise because the game doesn't prevent the player from building "underground".

The attack at 00:13:36, halfway through the caves while operations continue outside to mop up stragglers.

The attack at 00:19:56, only those two Galleys and two Ottoman Fishing Boats remain at this point.

The attack at 00:21:21, the final Galley sinks. All enemy military units are crushed, destroy the caches and gather the treasures.

The game at 01:30:59, the home city had reached level 5 due to building Mills (+80 experience each). The player can check their level progress by clicking Menu and Player Summary. This works only on scenarios where the player has no teammates, otherwise it opens the tribute screen

One of the few scenarios in the game where it is possible to build docks inside cliff walls. Given that this scenario can be beaten on any difficulty with a turtle and naval supremacy strategy as well, it's worth noting.

The Knights of St. John find a secret opening in the caves after detonating the Weapon Caches

Technically all the player must do to win this scenario is destroy all of the Weapon Caches, the time taken to win can be reduced to 5–7 minutes. Instead of following the above strategy to stop them from building, instead focus solely on destroying each of the caches and destroying them as quickly as possible.

Instead of immediately counterattacking and destroying their town hall follow the same steps above but then head in that direction and clear a path into the cave with the bombard in tow. Train 10-15 more crossbowmen and send them to the cache north of the starting town. Trying to build an artillery foundry to train some hoop throwers (bonus objective) at the base for defense is optional. Hotkey the bombard so the player can quickly deploy it or get it ready for travel. When the last cache is destroyed the scenario ends.