The Inquisitor is an outlaw that combines the role of a healer and a Spy. Like other outlaws, they cost little coin, but take more population spaces. Inquisitors have melee resistance, cause siege damage with their attacks, can heal injured units at a rate of 4 hit points per second, and are highly effective against mercenaries and hero units like the Explorer, the War Chief, and the Asian Monk, due to their increased attack and multiplier. They can enter Stealth mode, which makes them move slower (half speed), but turns them invisible to most units.

However, due to their increased population space and low speed, Inquisitors prove to be less useful beyond the Commerce Age, as they can be outclassed by Spies or Ninjas, who are better against mercenaries and heroes, can be upgraded further, and have a faster movement speed. Additionally, other Healers like Priests or Surgeons perform a better role due to their higher healing rate per second.

The Fencing School card is not available to Chinese, Japanese, Ottomans and Spanish.

Inquisitor image from the Compendium section 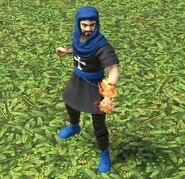