Age of Empires Series Wiki
Register
Don't have an account?
Sign In
Advertisement
in: Age of Empires, Infantry, Lists

Infantry in Age of Empires is one of the four combat forces on land, the other ones being archers, cavalry, and siege weapons. Infantry units are non-ranged foot soldiers.

Infantry cost food and gold, with the exception of the Clubman and Axeman, which only cost food. The main bonus of infantry is that they are cost effective and easy to mass, and can be used for assaults on enemy fortifications, while siege weapons and archers provide backup. Weak at first glance, infantry can be extremely important, since they are the cheapest unit branch, available early in the game, created quickly, and usually hold a medium to high attack.

Due to their low speed and lack of range, infantry units are easily taken down by archers or converted by Priests.

The Hoplite (and its later improvements) are not as good for fast assaults as the Short Swordsman, since Hoplites are slow and expensive, although they have a large amount of hit points so they can suck up damage that would kill the faster (but weaker) Swordsmen, who have lower armor and hit points.

Listed below are technologies that benefit infantry units. This list does not contain unit upgrades.

The following civilizations have bonuses that specifically benefit infantry units: 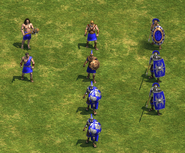 All infantry units
Community content is available under CC-BY-SA unless otherwise noted.
Advertisement